An east-to-west journey across Africa along some of the most treacherous 4×4 road conditions on Earth, in celebration of 30 years of the Land Rover Discovery. 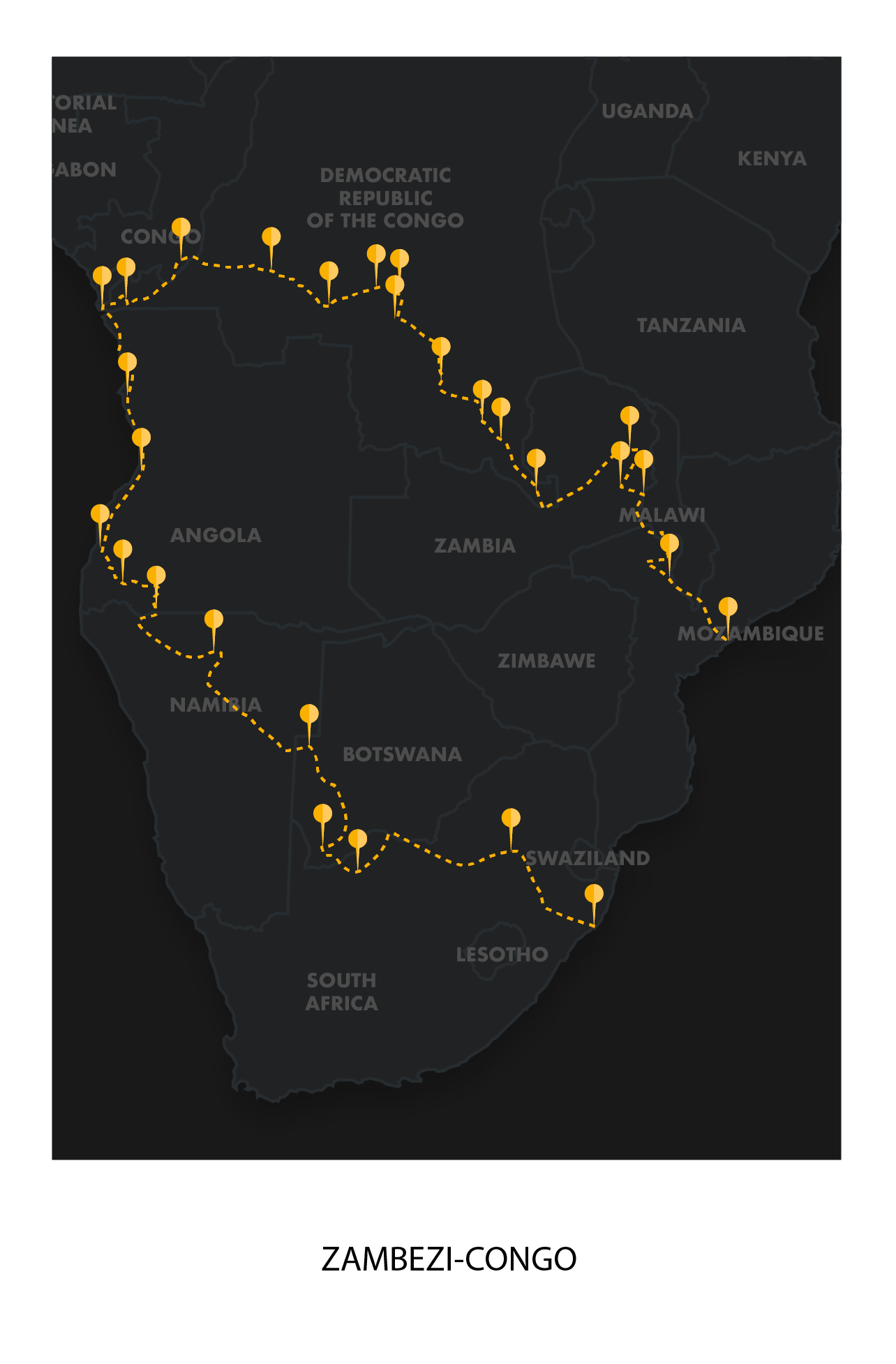 A journey east-to-west across Africa…. Ross had talked about it for years and we’d always dreamed of tackling the gruelling route through the vast Democratic Republic of Congo (DRC). So, what better way to commemorate the 30th anniversary of the Land Rover Discovery than a 10,000-kilometre Zambezi-Congo Expedition.

The geographic challenge was to attempt to traverse Africa from the Zambezi River mouth on Mozambique’s eastern coastline, then across Zambia and through the DRC to the mouth of the world’s deepest river – the mighty Congo ¬– on the Atlantic seaboard. We were using the same two Discoverys that in 2017 reached Ras Xaafun, Africa’s most easterly point in Somalia on the Horn of Africa, and then in 2018 completed the transcontinental journey from Cape Town to Kathmandu in Nepal. If we made it, it would be another world-first for the Discovery brand.

Hot on the heels of the Zambezi Delta Vision humanitarian work and as Holgate tradition dictates, we filled the expedition’s much-travelled symbolic Zulu calabash with Indian Ocean seawater from the mouth of the Zambezi. Then, armed with a new Scroll of Peace and Goodwill, the start of the expedition followed the river upstream along sand tracks to the Cahora Bassa dam, then turned north through Zambia’s wildlife-rich Luangwa Valley, to reach the Kumbalesa border post into the DRC.

The N1 national road from Lubumbashi to Kinshasa in the DRC has the reputation of being one of the most challenging 4×4 roads in the world – and so it turned out to be. A Congolese taxi driver told us, “It will take you maybe five to six years – the road is so bad, it’s quicker to walk.” He wasn’t joking: a couple of kilometres later, the track threw its unmaintained fury at us – and didn’t let up.

Broken-down trucks tell the story of this crippled road, with diffs, side shafts, axles and bearings succumbing to the pressure of their ridiculous loads. Out there you are on your own: fix it yourself – or leave it to join the many vehicle carcasses that litter the roadsides.

Averaging sometimes only around 50 kilometres a day, we fought our way over a record-breaking 2500 kilometres in mostly 4-wheel-drive low-ratio, negotiating loose gravel, axel-deep powder-soft sand, treacherous potholes and three-metre-deep ruts ploughed into the red earth by the transporter trucks getting stuck – some of the dongas were deep enough to swallow the Discoverys. Then the rains came early, turning the already difficult route into the near-intolerable. Sleeping disused quarries on the side of the road or camping at mission stations – everything covered in glutinous red mud – we fuelled up from dirty, mud-encrusted jerry cans, or at fuel-in-a-container filling stations. We even bought diesel from bicycle pushers, who heave ridiculously heavy loads all the way from fuel-rich Angola to sell in the DRC.

Detour after detour, days of winching, pushing and digging, rebuilding broken bridges and negotiating our way through hundreds of police checkpoints and ‘péages’ (toll booths) that must be some of the most expensive in the world. The roads, or lack thereof, weren’t our only challenge; we also faced the very real threats of Ebola, malaria and rebel activities. Expedition member Bruce Leslie went down with a bad case of dengue fever, exacerbated by hundreds of bedbug bites.

Finally, after nearly eight grueling weeks, the two Discoverys rolled into the port town of Banana and we emptied the symbolic calabash of water taken from the Zambezi River into the mouth of the Congo River where it pours into the Atlantic Ocean; against nearly impossible odds, we’d made it!

As with all our geographic and humanitarian expeditions, what made it all worthwhile was saving and improving lives through the provision of insecticide-treated malaria nets to pregnant women and mothers with young children, and the instant joy of elderly people in remote villages deep in the DRC’s vast Congo basin, who could see clearly again through the provision of Mashozi’s Rite to Sight reading glasses.

On a road system that has forced many other 4×4 travellers to abandon their vehicles and walk out, the Discoverys – already with over 80,000 hard-earned expedition kilometres on the clock – overcame every terrain obstacle. They went on to complete the 5,000Km return journey through the deserts of Angola, Namibia and Botswana without a single technical fault, proving that the new Land Rover Discovery is one of the most capable vehicles ever made.